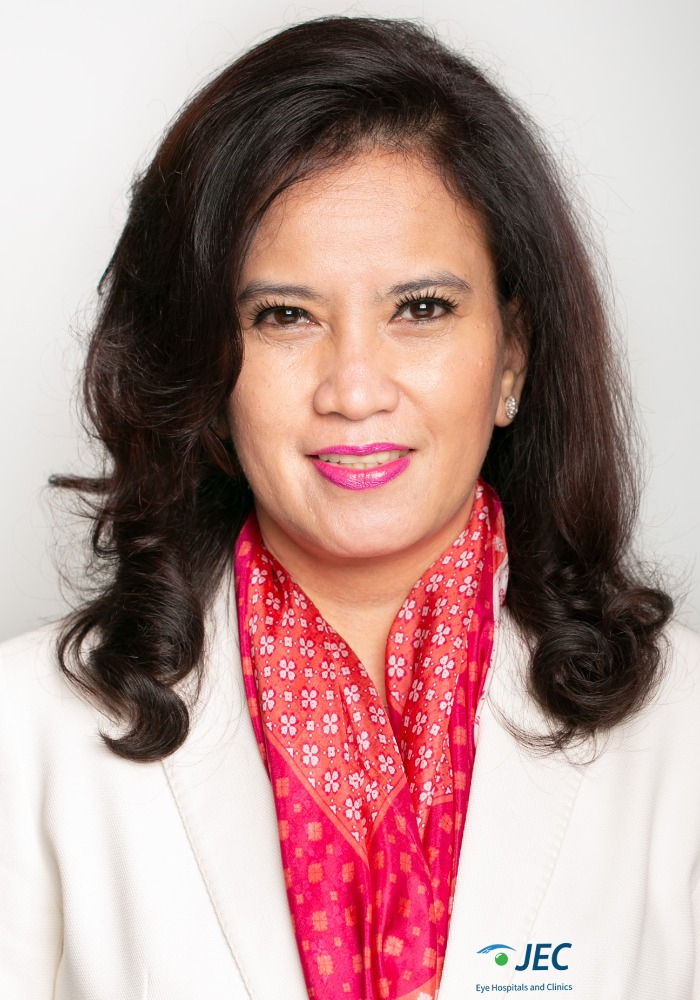 Dr. Yunia Irawati, SpM(K), is a senior consultant ophthalmologist in plastic and reconstructive surgery. She has been working for JEC Eye Hospitals and Ophthalmology Department, Faculty of Medicine, Universitas Indonesia – Cipto Mangungkusumo General Hospital (UI – RSCM), Jakarta since 2004. She graduated as a General Practitioner in 1992 and as an Ophthalmologist in 2003, at Universitas Indonesia. She joined the program as an Observer at Moorfields Eye Hospital London and Singapore National Eye Center in 2007 and also joined Adnexal and Orbital Fellowship Program at Seirei Hamamatsu Hospital, Japan in 2009.

Dr. Yunia Irawati, SpM(K) continues her work not only as a consultant but also a teacher who educates medical students, ophthalmology residents and fellow doctors in orbital and plastic reconstructive surgery at JEC Eye Hospitals and UI – RSCM.  Dr. Yunia’s clinical and research interest focus on eyelid reconstructive surgery, orbital socket and fracture reconstruction, and lacrimal excretion system surgery. Being an expert in cataract surgery, she contributes to cataract surgery social activities and LASIK. She serves as the Head of Plastic and Reconstructive Surgery Division at Department of Ophthalmology UI – RSCM; Head of Orbital and Oculoplastic Service and Head of Ocular Trauma Service at JEC Eye Hospitals. She is the current President of Indonesia Society of Ophthalmic Plastic and Reconstructive Surgery (INASOPRS).

Dr. Yunia Irawati, SpM(K) is the council member for the Asia Pacific Ophthalmic Trauma Society (APOTS) and member for the Asia Pacific Society of Ophthalmic Plastic and Reconstructive Surgery (APSORPS). She is often invited to be a guest speaker and actively participates in giving scientific presentations and workshops in national and international events. She writes books for educational purpose and publishes both national and international journals. Besides, since Dr. Yunia Irawati, SpM(K) has big interest in leprosy, she also leads a leprosy team, KATAMATAKU, which consists of doctors who specialize in ophthalmology, dermato-venereology, medical rehabilitation and orthopedics. As a Lecturer, she does her best to dig the potential in carrying out Tridharma Perguruan Tinggi (Three Pillars of Higher Education comprising Education, Research and Community Service).